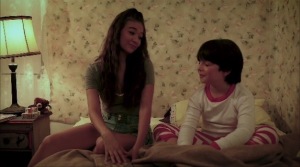 Short, sweet and effective. If there was ever three words to sum up a movie, then it would be those ones. Coming in at three and a half minutes, Nite Nite had no room for any unnecessary filler. Fortunately with some brilliant editing and a quick and snappy script, Nite Nite delivers in all areas, including adding a very intriguing message that perhaps believing in monsters in the only way to protect yourself.

Brady Bond steals the show as a boy who believes that there is a monster under his bed. To

have such an acomplished performance for his age is rare, and hats off to director, Chad Meisenheimer for getting the best out of him. Tommie Vegas’ character is your typical babysitter, however, she does mirror Bond’s in that being too old for monsters and games has left her vulnerable.

The effects are A grade and the design of the monster gives a reminder of the one in The Babadook. The film looks good, feels good, and overall is good. It could have gone wrong, giving too little or too much in such a short amount of time. Luckily, that is not the case, and Nite Nite is a winner.