If you ever mention Max Brooks’ name, the likely reply you will get is “he wrote those zombie books”, which, of course, is World War Z and The Zombie Survival Guide, respectively. Brooks’ short stories have also popped up in various anthologies, but another work of his is the gory and tense, The Exinction Parade.

What’s The Exinction Parade, you ask? Well, first off, it’s actually a comic book series. I know, know, how much will that cost you? Not much actually because it’s a limited run series with just five issues.  The story follows a three-way war between humans, vampires and zombies. The dead have swept across the world, and their number one food source is the same as the vampires — humans. 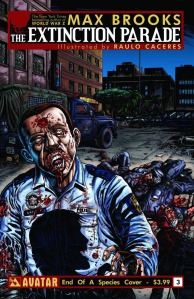 humans, and that the humans must also fight against the vampires. It’s like a triple threat where the loser gets eaten. Cool, right?

The comics are full of shocks and great storytelling, and something different than what you get with other Brooks’ works. What really stands out is the artwork by Raulo Cáceres, which is gorgeous and very intimate. It’s full of great design which you’d like to keep as posters.

It’s definitely worth checking out of you’d like zombies, vampires or all the above:

(All pictures courtesy of Avatar Press)